Orange & Blue (Both have white as second color)

To do: There is another variant called the V.Baby that has more advanced features, could possibly even be it's own console, and has it's own set of games in different cases possibly.

Text to be added, perhaps as a table?

If anyone has a console not from America, please look at the model number to see if there different from the other regions.

Insert info on the console here. It was sold in Orange & White, and Baby Blue & White. 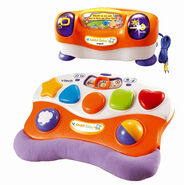 This sub-article is old info that was on this article that isn't related to the console, but instead some of the games for the console. Read the top of the below page BEFORE making any moves from that page to another one.

To Be Moved (Sub-article)