Alphabet Park Adventure is a platformer game released from 2004 to ~2007, and was published by VTech. and under license from Zamperla Amusments Inc

The game is the usual platformer where you have to walk through and save all the power rings that powers the park itself. While going through these stages, you will have to solve a problem relating to learning the Alphabet.

In the revision of the game with the character redesigns, they add new mini-games to the stages.

The Learning Zone is comprised of 4 different mini-games.

Add descriptions on the games, how to play them, ect.

Someone with access to the game should add a list of songs, and the gameplay of this mode. The menu for this mode shows a "Dance Moves" feature.

BTW for the transcript portion of the table, insert a link to a sub-article to this that will be for that Song's transcript. The summary should be a short description on what the song is about.

This is the new feature that was added in the revision that changed the characters' designs.

The Chinese version has this game as an English card, and has 5 content, while the others have 7.

[Maybe add some info on the stages, the kind of puzzles, and enemies within the stages.]

The rare render which shows this unknown dog/cat character, along with a pre-release cartridge design. 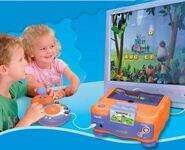 Another version of the image above, but not cropped, and in a lower res.

Another Pre-Release cartridge design from the American commercial

A pre-release screenshot of the game's Toy Park stage. 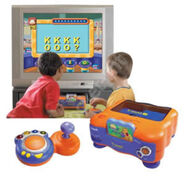 Pre-release image of the quiz room section on Monsterville, and possibly another cartridge label (the smaller V.Smile under the TV)

The button on the Chinese site

Sprite of the park's entrance as seen on the stage select screen.

The front cover of the game in China 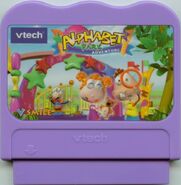 The back of the original version's cartridge

The German version of the game with the Special Edition clear case. 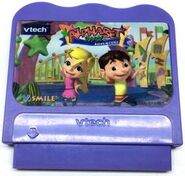 The revision to the game

The front of the Chinese's console box showing gameplay from this game in English.